Mechatronics is an interest that my colleague Andri and I share. For some months we have been trying to initiate a Mechatronics project but for some reason we never seem to be able to start even though we’re both pretty motivated.

Earlier this summer we met up and did a warm-up exercise. The purpose of the exercise was to get familiarized with the newly bought analog sonar. We hooked the sonar to a stepper motor that with the help of a BASIC Stamp Microcontroller turned the sonar 90° while measuring the distance to the next object. This way we got a reading in the Polar-plane which was then projected onto the XY-plane. Armed with the new coordinates it was relatively easy to have a computer draw up what our Wall-E «saw». On the right is our version of Wall-E. 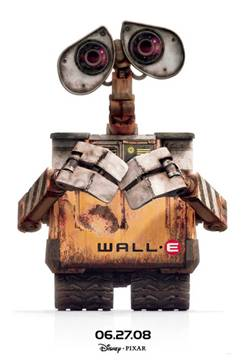 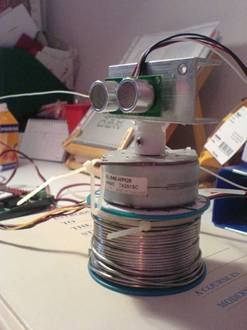 The Arduino Duemilanove (“2009”) is a microcontroller board based on the ATmega168 (datasheet) or ATmega328 (datasheet). It has 14 digital input/output pins (of which 6 can be used as PWM outputs), 6 analog inputs, a 16 MHz crystal oscillator, a USB connection, a power jack, an ICSP header, and a reset button. It contains everything needed to support the microcontroller; simply connect it to a computer with a USB cable or power it with a AC-to-DC adapter or battery to get started

Arduino can sense the environment by receiving input from a variety of sensors and can affect its surroundings by controlling lights, motors, and other actuators. The microcontroller on the board is programmed using the Arduino programming language (based on Wiring) and the Arduino development environment (based on Processing). Arduino projects can be stand-alone or they can communicate with software on running on a computer (e.g. Flash, Processing, MaxMSP). We intend to control the Arduino with a Beagle Board.

What our little Mechatron is supposed to do in the end is very unclear. We are mainly going to have loads of fun while learning the ropes of mechatronic. This week we’ll receive two (1, 2) books to start our journey. As we progress I’ll be posting the results on this blog.